Just a little warning, this post is rather long, as it includes a fair amount of background story. I had initially intended on writing the entirety of my Dominant Mode journey in one post, but realized that it’d just be too long! Part 1 will be focusing on background and the build. Part 2 will be about the event, results, and post-event thoughts :). Here goes.

I may have caught a robot bug. I had participated in FIRST Robotics in high school and loved the intensity and competition of the whole sport, but thought that the era had ended with my teenage years. Luckily, in my first year of grad school, I haphazardly stumbled upon some “underground” Bot Fighters, and a couple of the best people ever (including, but not limited to, Jamison and Charles). I met them just around the time Big Hero 6 had come out, and I could not believe that I had just found some real-life Hiros. At some point along the way, I was offered the opportunity to join their BattleBots team, Team JACD, which I am forever grateful for. Never have I imagined that I’d be part of something so awesome (and badass for that!). I was on national TV :O! Life will never be the same (I mean, I’m a celebrity! jkjk but I have recently found out that I’m on IMDB!).

Anyway, I digress. In the show BattleBots, 250lb remote-controlled robots fight in a closed arena (or the Battle Box) for 3 minutes or to the death (whichever comes first). However, there also exist many more “underground” events for smaller weight classes–30lb, 12lb, or even smaller than 1lb! Bot Blast is one of them. It takes place in a rather deserted mall in Pennsylvania and is for “insect weight classes,” which means 1, 3, and 6lb robots (ant, beetle, and mantis, respectively). Leading up to this event, I had done a fair amount of research–watching videos of fights from various events and many consultations with my bot-fighting experts. I knew pretty early on that I wanted to build a drum spinner. Personally, I loved how compact, destructive, and effective they could be. Luckily, I was able to inherit parts of Dominant Mode, Jamison’s previous 3lb drum spinner. The original frame was torn apart in its last combat, but most of the drum parts were still functional (including the 28-36 NTM 1000KV brushless motor in the drum), so I set off designing.

Here’s a picture of one of the earlier iterations of Dominant Mode!

I questioned Jamison a lot about things that he thought worked well for Dominant Mode in the past, as well as things that didn’t, and sought out to make all the improvements that I could. One of the first things he mentioned was the annoyance of having the drive shafts supported by the angled side plates. I thought long and hard about how to fix this issue, because I wanted to keep the wheel shafts doubly supported, and decided that an intermediate stage between the angled side plates and the wheels to support the shafts would be the best way to go. Not only would it isolate the wheel shafts from the outer frame, but would also save me the trouble of machining angled mounting blocks for the frame parts. As for my drive motors, I also inherited some Chewy-motors (assembled a guy named Chewy/Micah).

Another thing Jamison mentioned once to me, was that having rounded corners would be a nice advantage, so other spinners wouldn’t be able to catch on them. I decided to use tempered spring steel as armor wrapped around the outside of an aluminum frame. This, though, I decided not to incorporate into the CAD model. 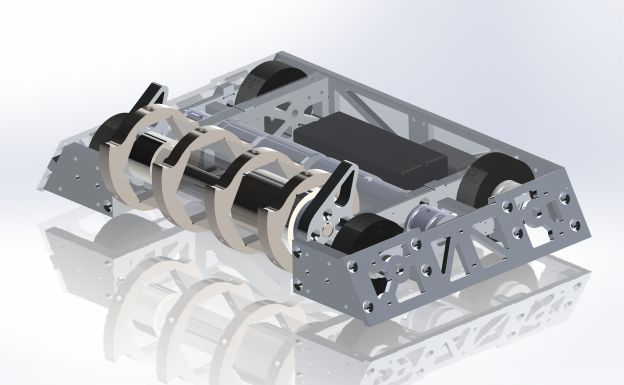 The previous iteration of Dominant Mode’s drum blades were 3/8″ hardened steel, but I happened to have some 1/4″ titanium that was scavenged from my lab once upon a time, so I decided to give titanium blades a shot, since it’d save me a lot of weight!

The general frame structure was kept similar to the original Dominant Mode, as it seemed pretty effective (with a couple tweaks here and there). The little “ears” on the inner rails were lowered a bit, so that while inverted, only the sharp part of the blades would scrape the arena floor and allow Dominant Mode to limp/hop/skip around. To self-right, I would just need to drive into a wall; this also meant, that I would have to do a good job with my soldering and electronics, but that would be doable. I had also initially designed it so that the top of the back wheels would touch the ground when inverted, so inverted driving wouldn’t be as difficult, but the foam wheels had a lot more squish than I had initially thought =/. More on that later.

I dragged the designing on a little longer than I should have, partially because the summer program I was teaching at MIT was ramping up and partially because I was nervous about double/triple-checking that all the parts assembled the way I wanted, since I was planning on watterjetting most of the parts. Luckily, MIT’s MechE department had just opened a new makerspace that was run by student mentors (like me!). Mentors have extra perks, such as 24h access to the shop, and $1/min waterjet (as opposed to the $3/min campus standard).

However, as I suspected and later reconfirmed, the waterjet in there was SUPER JANKY. I started with the titanium blades. Waterjetting them was easy, but I failed to think far enough ahead to realize the difficulty of drilling and tapping set-screw holes (for axial retention) without the proper tooling. A couple blades have broken drillbits embedded in them as a result of some failed drilling-attempts (adds character, right?). Tapping turned out to be even more impossible, so I eventually gave up. Good thing the blades were basically press-fit onto the hex, so axial retention wasn’t too necessary (might have lucked out on that one)!

Next, I finalized the frame parts and embarked on my journey to waterjet them all out. Man, I spent way too long in that shop for days attempting to get my waterjet parts to come out right, but eventually, I was able to get them all done! Just in time too! I came back from Bot Blast to find the waterjet out of commission and in need of a new charge pump. 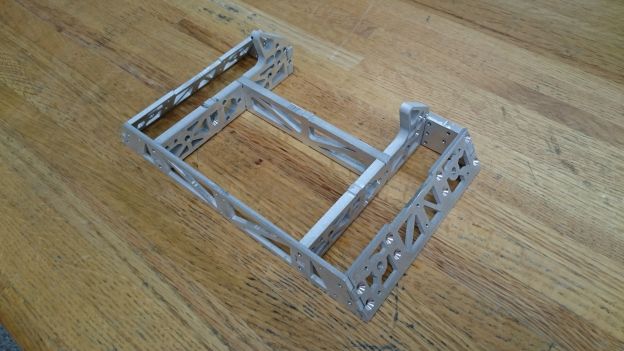 I was really excited to get all the parts cut out, but there was still tons to do (and at this point, it was already Thursday before the competition!). I was getting pretty giddy seeing everything come together, but also super worried that I wouldn’t be able to get everything done in time!

Fast forward to Friday night! Bot Blast was about a 6 hour drive from us, so we were planning on leaving Friday night around 1am. 11pm: catastrophe strikes! I had just assembled most of the bot together to find that the foam wheels squished more than I anticipated, and the drum blades hit the ground! In a flurry of frustration and panic, I almost rage-quit, but thanks to the encouraging and comforting words (and amazing help!) of Jamison, I was able to continue troubleshooting the issues. We replaced the front wheels with slightly larger wheels to raise the drum off the ground, and 3D printed hubs/pulleys. The clearance between the wheels and the front wall was a little scary, but there wasn’t much we could do about that at this point. At least I got to test drive around for about 1 minute, before finally heading off on this journey.

2 thoughts on “The Beginning of an Obsession? Bot Blast 2015: Dominant Mode Part 1 – The Build”