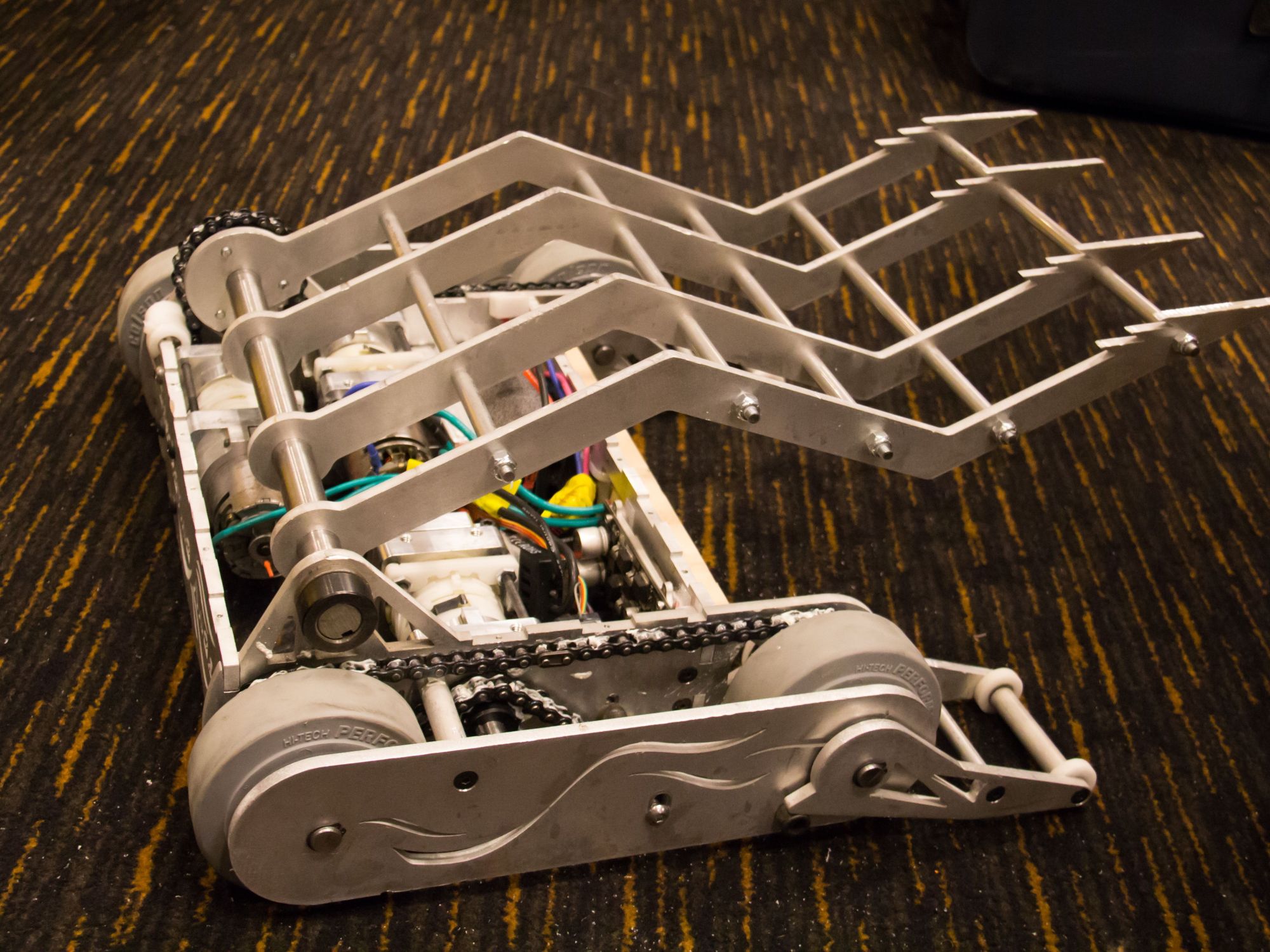 In case you haven’t read some of my past posts (you should go back and read them when you’re done here), HaLuCyNation is a collaboration of the girls from ABC’s BattleBots Team JACD. The team members include Hanna, Lucy (myself), and Cynthia Lu (yes, we thought we were clever too).

After BattleBots, we were all riding the robot-high, so we decided to get together and build a 30lb sportsman class combat robot for Dragon Con Robot Battles. Before anything though, let me explain the name. Destroying Angel is one of the top 10 poisonous mushrooms in the world, along with Deathcap (yeah? remember that one?).

We started with “researching” existing bots by watching past videos of sportsman class events and Dragon Con Robot Battles. Whenever we saw a good idea (or came up with one), we wrote it down no matter how crazy it was. One of our favorite crazy ideas was called “The House Party”, based off the House Party Protocol referenced in Iron Man 3. It involved 3 10lb multibots, each controlled by one of us. However, it turns out that by the Robot Battles rules, multibots were not allowed. Alas, this crazy idea might just have to be implemented in a future event. Hm…

In the end, we ended up deciding on a lifter/flipper robot, as inspired by Überclocker, Bug Love Robot/MegatRON, and Nyx.

First and foremost, a robot’s mobility is important. We wanted the robot to be both fast and maneuverable. In the end, we chose a 4-colson-wheel drive powered by 2 Dewut gearmotors with a little extra reduction. *Note: you will find that we use a lot of Equals Zero Designs equipment, as we are conveniently located near headquarters :). We geared the drive so that it would be able to cross the battle platform in just over 1 second at full speed. Not bad. We used #35 chain on the drive, partially because it’s a fairly standard chain size, but mostly because it’s very forgiving of errors in misalignment and tension; we figured this might be important if we’re planning on smashing into other robots, just in case stuff gets bent.

A “dead” steel (1566) shaft is mounted to the frame. A carbon steel (12L14) hex rod that transfers torque from the sprocket to the wheel spins freely around the drive shaft. A MarkForged 3D printed custom nylon insert was press-fit and glued to the inside of the colson wheel. Both the sprocket and the nylon insert have hex bores that fit snugly on the hex rod. The wheel, some spacers, and sprocket were all axially constrained on the steel rod with retaining rings.

The weapon is a lifter/flipper arm also also actuated by a Dewut in low gear with an extra 22:12 reduction. The sprocket rotates a live keyed shaft that transfers torque to four 1/4″ aluminum waterjet arm plates. We initially designed the arm with 1/8″ aluminum rectangular bars connecting each of the four plates. However, after some thought, we realized that the design may not be stiff enough to lift a 30lb bot. Instead, we ended up running steel threaded rod through all four plates with aluminum tube (greater bending moment of inertia!) spacers between.

The arm had teeth/barbs in front to let us easily wedge the arm underneath opponents, but prevent them from easily backing out. The arm travel was >180 degrees which, combined with the low profile of the robot, allowed us to self-right pretty easily when flipped over.

For Destroying Angel, we not only wanted function, but also aesthetics. After all, the real challenge of engineering is to create something both elegant and effective. The amazing artist on our team (Cynthia) created a custom design that was waterjetted into the back plate. Oh, and we have tshirts :).

The frame was mostly made of waterjet 1/4″ 6061 aluminum with 1/8″ polycarbonate top and bottom plates. Outriggers in front of the wheels on either side were added to provide extra leverage when lifting/flipping robots. These have a hard stop (a bolt screwed into the drive frame) to restrict upwards motion.  A RageBridge 2 (courtesy of E0 Designs) controlled our drive motors. We used a Botbitz ESC to control our weapon motor. Powering the whole thing was a 7s1p Lithium Polymer battery pack. We made a “disconnect-key” style switch using a Dean’s connector with the female end embedded in an ABS 3D printed mount on the frame.

We were able to get a little testing in before having to send the robot off. Turns out, the arm is TERRIFYINGLY fast (which we later fixed with some dual rating), and the drive handles pretty well. Some video footage of testing is below. Guest appearance by Jamison Go’s Horse Mean Ninja.

Charles and Cynthia drove down to Atlanta in Mikuvan with the bots, tools, and hardware while the Dane, Hanna, Jamison and I flew down. Hanna’s family is from around Atlanta and conveniently happen to have an awesome, unfinished basement perfect for underground (literally!) bot fighting! We took all 3 of our bots (Überclocker, Overbite, and Destroying Angel) down for some drive practice the night before Robot Battles.

We drove around the dusty floor, threw around a ball, and did some light battling. Thank goodness we did this, because we encountered a couple issues that we were able to fix before the actual competition the next day. We also happened to shear the motor-side weapon sprocket right in half! After some inspection, we found that it was due to lack of chain grease, improper tensioning, and agressive arm-slamming (all things we were able to fix before the competition). A very fashionable wooden plank was also ziptied to the front of the robot to prevent robots like Nyx, Überclocker, and Overbite from piercing our LiPo.

Robot Battles was a ton of fun. Hanna and I split driving duties; she controlled the weapon while I did drive. This is typically a difficult feat, but I think we did a pretty good job. Driving on the stage was very difficult for us (and other similar fork-type robots) because we kept getting caught on the floor.

The matches were best-two-out-of-three. For our first match, we were put up against Styx from Near Chaos Robotics. We lost the first round, tied the second, and ultimately lost in the third.

For our second match, we were matched up against Charles (interfamily feud!). While we ended up losing the match, we were still able to take it to a third round. However, at the end of the last round, our arm motor gave out (the cause of which is still beign investigated).

We had just enough time to secure the arm in a stationary position to participate in the rumble. Hanna drove for the rumble and was able to take out several bots before eventually going down. Hilariously enough, Überclocker (who at this point had lost most driving capability) was somehow able to win the rumble.

Overall, we were pretty pleased with Destroying Angel’s performance at the event. We noticed that driving skills are extremely important in the sumo-style events, even more so than full combat. For our next competition, we definitely want to find some time to do a ton of extra driving. We are currently working on a round of improvements for Destroying Angel for our next competition, Franklin Institute. These improvements are mostly minor tweaks and changes to fix some of our issues or provide more permanent solutions for the janky fixes we threw together at the event. In the mean time HaLuCyNation is also long-term scheming for perhaps, Motorama.